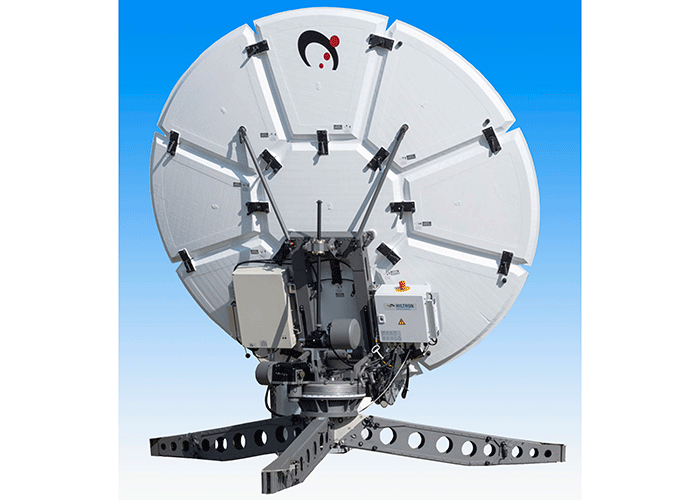 Supported on a high-stability ground pillar, HMAM LEO incorporates the computing resources to track satellites using the NORAD TLE (two-line element) data format which defines satellite locations based on their location and velocity. HMAM LEO is capable of accommodating parabolic antennas up to 2.4 metres diameter and can lock onto the desired satellite within the approximately 10 minute timespan where a low earth orbit satellite is in sight. The mount can be oriented within more than 360 degrees of azimuth and 80 degrees of elevation at the required tracking speed."

The Hiltron HSACU4 is a compact antenna control unit for use with flyaway antennas. It is based on the same modular architecture as the HACU antenna control unit which is used for antennas at hundreds of earth stations worldwide. Elements such as a polarisation driver, an integrated beacon receiver or power supply modules for the LNBs can be integrated. Control and monitoring are performed through an Ethernet link with an intuitive web interface, or via a directly connected handheld unit. An auto-pointing function can be activated using the web interface which displays the coordinates of the target satellite. After locating the satellite, the HSACU4 progresses to fine-adjustment mode. It can also scan a predefined area and search within this area for a satellite. Steptrack and TLE for NORAD data are supported and can be automatically activated after fine pointing of the antenna. Prediction tracking is included for inclined-orbit satellites.

3D laser scanning and evaluation of teleport antennas is service based on technology developed by Hiltron’s subsidiary partner, ESA Microwave GmbH. It allows reflectors of practically any size to be measured quickly and at very high resolution as part of a complete performance evaluation. This is especially important when teleport antennas are upgraded to higher frequencies such as the Ka-band.

"The 3D laser scanning technique we use is far more accurate than the commonly employed photogrammetry method and can be performed while the antenna is actually in operation," comments Peter Kneissl, Head of Research & Development at ESA Microwave. "It is also much more efficient than photogrammetry which requires manual attachment of measurement targets to the reflector, a time-consuming process and one which results in only a few hundred points being measured. Our technique can capture a million surface reference points per second with a geometric accuracy of less than 1 mm. The resultant information is integrated into a cloud of approximately 60 million points from which a computer-aided design model is created. After digitisation and computation of the reflector and sub-reflector topography, we use the ingested data to calculate alignment, registration and any required fine-tuning such as surface restoration. Measured specifications and related performance parameters are delivered to the antenna operator or owner together with recommendations clarifying whether the antenna would benefit from upgrading, conversion or fitting with a multi-band feed system."

The 3D laser-based satellite antenna scanning service is available to new and existing Hiltron customers for any brand and model of satellite reflector, up to 35 metres in diameter..