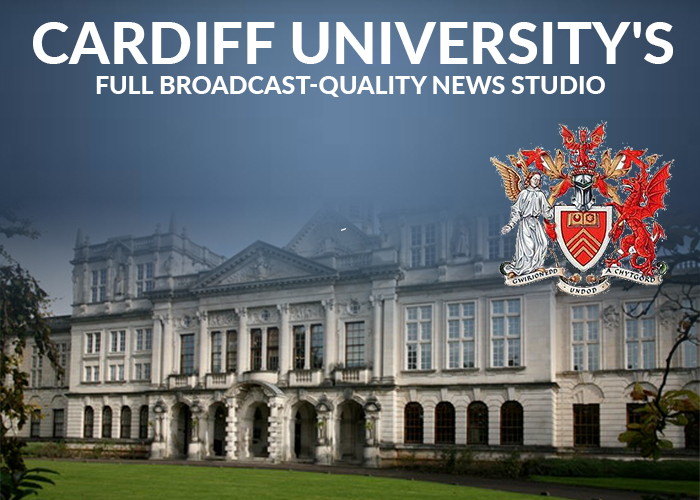 Danmon Group announces the completion of a full broadcast-quality news studio facility for Cardiff University's School of Journalism, Media and Cultural Studies. The project coincides with a relocation to new city-centre premises situated next to BBC facilities. Cardiff Uni-versity will use the facility to train the next generation of television, radio, online and printed-media journalists.

"We were invited to propose a turnkey solution based on an outline specification provided by the university," explains ATG Danmon Managing Director Russell Peirson-Hagger. "The project comprised a large TV studio and dedicated gallery, a smaller TV studio with its as-sociated gallery, plus a broadcast newsroom. Both galleries connect via SDI to Vizrt me-dia, graphics and automation. Avid iNEWS is also integrated."

"The system also links to a news presentation suite where a remotely controlled camera and two-way video feed allow the newsreader to talk to a newsroom reporter. The sys-tems simulate the functionality and processes of a real broadcast environment, the out-put being used for academic review."

"We worked in collaboration in partnership with Cardiff University staff to design and inte-grate a complete solution that kept within the organisation's budget and met or exceed-ed the specified level of functionality. The project includes a full guarantee and the option of long-term support."

The smaller of the two TV studios is a single-camera version of the large studio, with simi-lar infrastructure. ATG Danmon provided and integrated a single-rail light support with ca-bling, Viz Opus compact-control-room automation and a Yamaha audio mixing desk.

Training in the operation and maintenance of the systems installed was provided on completion of the project which also includes a full guarantee and the option of long-term technical support.